Home Get Smarter The Shifting Boundaries of What a “Shutdown” Entails

On December 26 the Federal Emergency Management Agency (FEMA) posted a notice on its website that it would not “issue new contracts for flood insurance during a lapse in authority [the partial shut-down] unless Congress passes legislation.” The uproar was such, though, that within two days FEMA reversed this decision, reviving flood insurance.

The government’s National Flood Insurance Program, created in 1968 as part of the Johnson administration’s Great Society agenda, insures millions of homes in participating communities, largely in areas where flooding risk makes private insurance unavailable. Though the original intention was that the program would fund itself through premiums, it has been in the red for most of the 21st century, and so has had to borrow from the US Treasury.

The US government entered partial shutdown on December 22 because Congress has not accommodated the administration’s demand for $5 billion for a border wall with Mexico. How partial is partial? That is the question.

The White House Office of Management and Budget appears to have been involved in FEMA’s change of heart, as were a number of legislators of both parties. Flood policies continue to be issued. 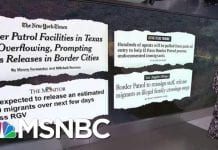 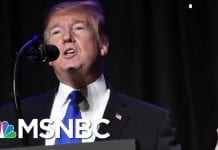 Trump: Wall Is ‘On Its Way,’ Will Be Harder To Climb Than Mount Everest | The 11th Hour | MSNBC

Lethal Injection Enthusiast Defeats a Challenge from his Right