The US Secretary of State, Mike Pompeo, may run for a seat in the Senate from his home state of Kansas next year. Amid widespread speculation on the subject, Pompeo has neither confirmed nor denied such a plan.

One of Kansas’ Senators, Pat Roberts, announced early this year that he will not run for reelection next year. Roberts is a Republican, and the Democratic Party would presumably love to pick up this seat as part of the larger goal of gaining a majority in that chamber. Running a strong candidate to replace Roberts is, likewise, a critical goal for the Republicans.

Secretary Pompeo spoke at Kansas State University on Friday, September 6. He did not speak on the subject of his ambitions, but stuck with the advertised topic of human rights as a matter of foreign policy. He made reference, for example, to the oppression of the Uighurs in China.

One issue of more pressing concern for many Kansans than the rights of the Uighurs may be Kansans’ ability to sell their wheat to China, an ability threatened by the administration’s trade war. Pompeo’s association with that trade policy may be a hindrance should he make the run for Senate there. 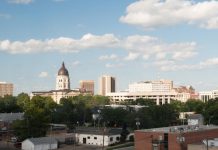 Bollier, Kansan Dem, Focuses on Schools in Her Senate Run